Litigation: When is a Case Settled?

IS THE CASE SETTLED OR NOT?  WHEN DO THE ACTIONS OF AN ATTORNEY ENGAGED IN HIS OR HER CAPACITY BIND THE CLIENT TO THE SETTLEMENT? 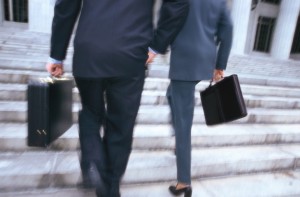 It is not too difficult to imagine the following scenario. There is bitter litigation between 2 or more parties that has dragged on for several years. Each side is represented by legal counsel, and each has spent thousands of dollars in legal fees trying to posture the case in their favor. A trial is approaching shortly. The parties are each growing weary of the case; it has become too time consuming and expensive, and the law of diminishing returns has set in for all involved. This is why the overwhelming majority of civil disputes ultimately settle before trial. Lawyers know it, and so to the clients and judges.

In fact, our court system is designed to encourage and foster settlements. In the Superior Court of New Jersey, Law Division,, all contract and business law disputes are generally subject to mandatory mediation with a court-appointed mediator who agrees to volunteer up to 2 hours of his/her time trying to foster settlement of the cases they are assigned to. The mediation is usually scheduled at the initial stages of the case, and the litigants’ attendance is required. While the mediator has no power to force the parties to settle, an early intervention with all parties present face-to-face can sometimes lead to a settlement before the parties engage in substantial pretrial discovery proceedings.

In Chancery Court matters, the judge will usually schedule a status conference at the early stage of the case at which time the judge may ask the lawyers to explore various settlement options.

At some point during the case, assume the various parties reach a settlement while appearing either at a court hearing, mediation hearing or status conference. The lawyers take a few moments to jot down the key or principal terms of the settlement, and ask to see the judge so that they can place the settlement terms on the record in open court thus creating a binding contract or agreement to settle the case. Each litigant assures their lawyer that they are on board with the settlement terms, but because a few of them have other commitments they tell their lawyer to proceed without them and to fill them in on the details afterwards. The judge then comes out, the lawyers enter their respective appearances for their clients, and usually one of the lawyers lay out the specific terms of the settlement in the presence of a court reporter or while the proceeding is being taped in the courtroom. The judge asks each lawyer to confirm his or her understanding of the settlement, to confirm that each client is on board, etc. The judge then thanks everyone for working together to reach a consensual resolution, tells the lawyers that they can memorialize the settlement terms in a stipulation to be filed later on, and leaves the bench.

In the next week or two a draft of a stipulation of settlement is prepared and circulated to everyone by email. Suddenly, one of the litigant’s objects to the settlement claiming he/she never agreed to that term and refuses to allow his/her lawyer to sign the stipulation. Unfortunately, this happens quite frequently in litigation with one of the parties either suffering from buyer’s remorse, realizing they made a mistake, or simply misunderstanding a key component of the settlement.

The relationship between an attorney and client is that of principal and agent. An agency relationship is created “when one person (a principal) manifests assent to another person (an agent) that the agent shall act on the principal’s behalf and subject to the principal’s control, and the agent manifests assent or otherwise consents so to act.” Lawyers’ Fund for Client Prot. v. Stewart Title Guar. Co., 203 N.J. 208, 220 (2010).

The focus on an analysis of whether the attorney had actual authority is on the client’s manifestations to the attorney regarding settlement and the attorney’s reasonable interpretation of those manifestations.  Newark Branch, N.A.A.C.P. v. Township of West Orange, 786 F.Supp. 408, 424 (D.N.J. 1992)(New Jersey law). The general rule is that unless an attorney is specifically authorized by the client to settle a case, the consent of the client is necessary. City of Jersey City v. Roosevelt Stadium Marina, Inc., 210 N.J. Super. 315, 327 (App. Div. 1986).

Negotiations of an attorney are not binding on the client unless the client has expressly authorized the settlement or the client’s voluntary act has placed the attorney in a situation wherein a person of ordinary prudence would be justified in presuming that the attorney had authority to enter into a settlement, not just negotiations, on behalf of the client.” Amatuzzo v. Kozmiuk, 305 N.J. Super. 469, 475 (App Div. 1997)(citing United States Plywood Corp. v. Neidlinger,41 N.J. 66, 74 (1963)(emphasis added)(other internal citation omitted). “Thus, in private litigation, where the client by words or conduct communicated to the adverse attorney, engenders a reasonable belief that the attorney possesses authority to conclude a settlement, the settlement may be enforced.

Are the attorney’s words or acts alone sufficient to clock the attorney with the apparent authority of his client?

No. The attorney’s words or acts alone are insufficient to cloak the attorney with apparent authority.” Amatuzzo v. Kozmiuk, 305 N.J. Super. at 475-476.  “It is well settled that ‘stipulations . . . made by attorneys when acting within the scope of their authority are enforceable against their clients.'” Jennings v. Reed, 381 N.J. Super. 217, 230 (App. Div. 2005)(quoting Carlsen v. Carlsen, 49 N.J. 130, 137, (App. Div. 1958). “Consequently, an attorney is presumed to possess authority to act on behalf of the client, and the party asserting the lack of authority must sustain ‘a heavy burden to establish that [her] attorney acted without any kind of authority in agreeing to the entry of judgment in the trial court.'” Jennings v. Reed, 381 N.J. Super. at 231

Contact our New Jersey lawyers today to discuss your legal matter, and our law firm will respond to your inquiry within 24 -48 hours.  For emergent matters, please call us at (201) 498-0400.