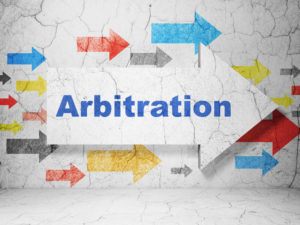 New Jersey employers must be mindful of the Appellate Division’s recent decision negating an arbitration agreement that failed to identify the arbitration forum or the method by which arbitration would be conducted.  Flanzman v. Jenny Craig, Inc., et al., Docket No. A-2580-17T1 (App. Div. October 17, 2018).

In this particular case, an 82-year old plaintiff brought suit against her former employer, claiming age discrimination and harassment in violation of the New Jersey Law Against Discrimination. The plaintiff worked for the employer for 26 years. In the 21st year of her job her employer presented her with a document that she ultimately signed and which contained the following  provision:

Any and all claims or controversies arising out of or relating to [plaintiff’s] employment, the termination thereof, or otherwise arising between  [plaintiff] and [defendant] shall, in lieu of a jury or other civil trial, be settled by final and binding arbitration. This agreement to arbitrate includes all claims whether arising in tort or contract and whether arising under statute or common law including, but not limited to, any claim of breach of contract, discrimination or harassment of any kind.

. . . [Plaintiff] will pay the then-current Superior Court of California filing fee towards the costs of the arbitration (i.e., filing fees, administration fees, and arbitrator fees) . . . .

The trial court upheld the arbitration agreement, and the plaintiff appealed.

The appellate court reversed, declaring the arbitration agreement invalid because the parties did not have a “meeting of the minds” – a critical element for an enforceable contract.

“The failure to identify in the arbitration agreement the general process for selecting an arbitration mechanism or setting – in the absence of a designated arbitral institution like AAA or JAMS – deprived the parties from knowing what rights replaced their right to judicial adjudication.”

WHAT IS THE IMPORT OF THIS DECISION?

Boiler plate arbitration provisions will not suffice. The drafter of an employment contract must incorporate specific provisions about where and how the arbitration is to be conducted, and provide for an alternative arbitration forum in the even the one selected by the parties at the time of contract is no longer in business.