Expert Testimony Not Necessarily Limited to Scope of Report 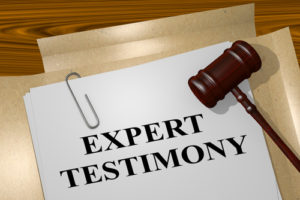 In New Jersey can an expert witness testify beyond the scope of the subject matter of his report?

In limited circumstances the answer is yes so long as the party proffering the expert’s report did not treat the report as an adoptive admission in pretrial discovery.

The controlling case is Skibinski v. Smith, 206 N.J. Super. 349 (App. Div. 1985), which involved an automobile negligence claim brought by a husband and his wife. The Skibinskis appealed from their $70,000 jury verdict, arguing that the trial judge erroneously excluded the opinion testimony of their neurological experts that the husband was totally disabled by the accident and unemployable because the experts failed to include the opinion in their reports produced before the trial.

The Sabinskis offered the testimony of two neurologists to prove that the husband was totally disabled. Neither report contained an opinion that the husband’s disability was total leaving him permanently unemployable. In excluding the proffered testimony the trial judge stated that an expert’s testimony must be confined to the opinions expressed in the expert’s report provided in discovery.

The appeals court reversed on the basis that the reports could not be considered an “adoptive admission” by plaintiffs.  The Appellate Division noted a distinction between furnishing answers to interrogatories or written questions in advance of the trial and producing an expert’s report in response to a request contained in interrogatories.

A party is thus not ordinarily bound at trial by a witness’s statement furnished in discovery. However, because a party is bound by his own admissions he may become bound by the statements of others if the party expressly adopts those statements as his own. See Evid.R. 63(8) (Authorized and Adoptive Admissions).

The appellate court cited the following two examples where a party’s production of an expert’s report in pretrial discovery can serve to limit the expert’s trial testimony:

The defendants in Skabinski followed the Uniform Interrogatories appearing in Form A in Appendix II to the New Jersey Court Rules. “That form merely contains a request for a copy of an expert’s report and therefore does not produce admissions that can be used to limit the expert’s testimony at trial. The trial judge therefore erred in mechanically limiting the doctors’ testimony to the contents of their reports.”

Under the guidance of Skabinski, merely producing an expert’s report in pretrial discovery is not tantamount to an adoptive admission restricting the expert’s trial testimony to the scope of his report unless the report is produced in response to a specific interrogatory asking for: (1) certain information and the answering party responds, “see attached expert’s report”; or (2) a summary of what the expert is expected to testify, including the substance of the expert’s facts and opinions,

In Skabinski, the appellate court concluded that at least 2 years before the trial defendants knew that plaintiffs would be claiming permanent disability that rendered the husband unemployable.  Thus, the appeals court determined the absence of unfair surprise or prejudice further militated against excluding the evidence of the experts’ testimony.