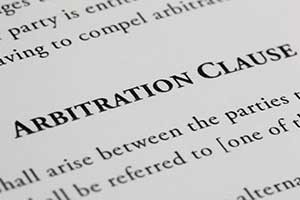 Can a New Jersey employer enforce an arbitration provision appearing in an employee handbook? Not if the handbook disclaims that its provisions create a contract between the employer and employee, the New Jersey Appellate Division recently ruled in a published decision. Morgan v. Raymours Furniture Company, Inc., et al.,___ N.J. Super.___ (App. Div. 2016).

The employee alleged, among other claims, that the employer violated the New Jersey Law Against Discrimination. Despite the employer’s unsuccessful attempt to persuade it’s the employee to sign a separate arbitration agreement, the employer nevertheless sought to compel arbitration of the employee’s claims based on the company’s handbook providing for arbitration of disputes. However, that handbook also contained a disclaimer, stating in part: “Nothing in this Handbook or any other Company practice or communication … creates a promise of continued employment, [an] employment contract, term or obligation of any kind on the part of the Company.” Relying on the effect of this disclaimer language, the trial court rejected the employer’s request to compel arbitration. The employer appealed.

The Appellate Division affirmed the trial court’s decision, remarking that “[h]ere, the employer would seek both the benefit of its disclaimer in most instances, while insisting that the handbook was contractual when it suits its purposes….” Invoking equitable principles, the Appellate Division recognized the inconsistency with the employer’s two-faced position; i.e., on the one hand arguing that its dealings with its employees as set forth in its handbook were not contractual, but on the other hand referring to the same handbook in arguing that the employee contracted away his right to sue. Interestingly, the appeals court noted that “had plaintiff executed the stand-alone arbitration agreement presented to him when a rift formed in the parties’ relationship, a different outcome would likely have followed.”

The appellate court’s suggestion of a different outcome if the employee had signed a stand-alone arbitration agreement provides employers guidance on addressing his issue. In short, New Jersey companies that seek to compel employees to arbitrate employment disputes would be wise to present a stand-alone arbitration agreement at the beginning of the employment relationship, not in the midst of the relationship. Further, New Jersey employers should use this opportunity to review employee handbooks and update the terms as necessary, as well as have employees sign a writing acknowledging their receipt of the handbook.