“Not True,” Says The Plaintiff. But That’s What You Allege in Your Federal Court Complaint! The Concept of Binding Judicial Admissions

We live in a fast paced world of the digital age. Multiple drafts of legal documents fly back and forth in emails exchanged between attorneys and their clients.  A client gives his attorney the basic facts and documents to commence a federal court action. The attorney and client review multiple drafts, but somewhere along the line a mistake is made. The client doesn’t see the mistake and tells his attorney to file the Complaint – “It looks good. File it!” 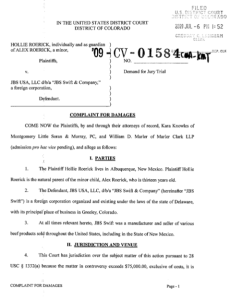 So what happens then when plaintiffs in a federal court case attempt to back away from statements asserted in their Complaint. “Not true,” says the plaintiffs. “We don’t admit that.”  The defendants scream, “But that’s what you stated in your Complaint and you’re bound by those statements!”

Are the plaintiffs indeed bound by the statements made in their Complaint?

Judicial admissions are formal concessions that are binding on a party that makes them in a judicial proceeding. Factual allegations made by litigants in their pleadings are binding judicial admissions on those litigants.  See, e.g., Sovereign Bank v. BJ’s Wholesale Club, Inc., 533 F.3d 162, 181 (3d Cir.2008)(where a party attempted to take a legal position on appeal that was contradicted by an allegation in its complaint, the Third Circuit held that the allegation was a binding judicial admission); Parilla v. IAP Worldwide Servs. VI, Inc., 368 F.3d 269, 275 (3d Cir.2004)(Third Circuit denied the appellee’s motion to dismiss an appeal for lack of standing because, inter alia, factual concessions in her own complaint revealed the basis for appellants’ standing); Judon v. Travelers Property Cas. Co. of America, 773 F.3d 495, 509 n 6 (3d Cir. 2014)(“A fact asserted in a pleading, which is both unequivocal and which would normally require evidentiary proof, constitutes a judicial admission”)(citing In re Teleglobe Commc’ns Corp., 493 F.3d 345, 377 (3d Cir.2007), as amended (Oct. 12, 2007); Parilla, supra.)).  Other circuits have similarly held. See Ferguson v. Neighborhood Housing Services, 780 F2d 549, 551 (6th Cir.1986)(stipulations and admissions in the pleadings are binding before the trial and appellate courts); White v. Arco/Polymers, Inc., 720 F.2d 1391, 1396 (5th Cir.1983).

However, in West Run Student Housing Associates, LLC v. Huntington National Bank, 712 F.3d 165 (2013), the Third Circuit held that factual allegations made in an original complaint are not binding judicial admissions where such allegations have been omitted from a subsequent amended complaint.  Id. at 171-172.  See also Giannone v. U.S. Steel Corp., 238 F.2d 544, 547 (3d Cir. 1956) (recognizing that “withdrawn or superseded pleadings” do not constitute judicial admissions). In West Run, the Court explained as follows:

Even if Plaintiffs’ allegations in the original complaint constituted judicial admissions, it does not follow that they may not amend them. This Court and several of our sister courts have recognized that judicial admissions may be withdrawn by amendment. . . see also, e.g., InterGen N.V. v. Grina, 344 F.3d 134, 144-45 (1st Cir. 2003)(“An amended complaint supersedes the original complaint, and facts that are neither repeated nor otherwise incorporated into the amended complaint no longer bind the pleader.”); 188 LLC v. Trinity Indus., Inc., 300 F.3d 730, 736 (7th Cir. 2002) (“When a party has amended a pleading, allegations and statements in earlier pleadings are not considered judicial admissions.”); Huey v. Honeywell, Inc., 82 F.3d 327, 333 (9th Cir.1996) (“When a pleading is amended or withdrawn, the superseded portion ceases to be a conclusive judicial admission….” (citation and internal quotation marks omitted)); Hibernia Nat’l Bank v. Carner, 997 F.2d 94 101 (5th Cir.1993) (“To the extent that Hibernia did make a ‘judicial confession[]’ [in its original complaint,] that confession was amended away.” (citations omitted)). Indeed, effectively disallowing amendment by looking to the original pleading is contrary to the liberal amendment policy embodied in Rule 15.

WHAT IS THE MORAL OF THE STORY?

The Complaint is a very important document that must be carefully drafted and reviewed prior to commencing a federal court lawsuit.  If factual mistakes or inconsistent statements are discovered in time, the prudent practitioner will seek leave to amend a previously filed Complaint under Fed. R. Civ. P. 15 to avoid his client from being deemed bound by such mistaken statements.