Res Judicata Applied in Federal Court – Been There And Done That 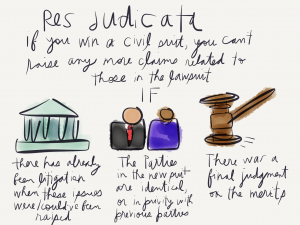 Res judicata, also known as claim preclusion, is the Latin term for “a matter already judged.  The doctrine prevents litigants from filing a second lawsuit to assert claims that have already been disposed of on the merits in an earlier lawsuit. See In re Mullarkey, 536 F.3d 215, 225 (3d Cir. 2008). It also bars claims that could have been brought in a previous action.  Id.

The legal concept of res judicata arose as a method of preventing injustice to the parties of a case supposedly finished, but perhaps mostly to avoid unnecessary waste of judicial resources. The doctrine of res judicata does not merely prevent future judgments from contradicting earlier ones, but also prevents litigants from multiplying judgments, and creating confusion.

As demonstrated above, the doctrine of res judicata can be an effective defense to dispose of duplicate litigation filed over sour grapes.  It’s application is a fact sensitive inquiry for a federal court to undertake.

This article is for informational purposes only and is not intended to create an attorney-client relationship with LoFaro & Reiser, LLP. Nor is this article intended to be an exhaustive review of its subject matter.