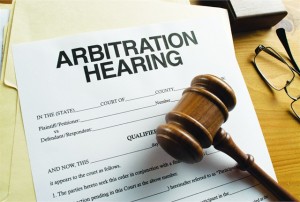 2016) handed consumers a victory by declining to enforce the provision of an arbitration agreement involving the claims of two disgruntled students who had enrolled in Sanford Brown Institute’s ultrasound technician program.

The enrollment agreement contained an arbitration provision delegating authority to an arbitrator to determine issues of arbitrability, but did not mention that the students were surrendering their right to resolve their legal claims in a judicial forum. In other words, the dispute centered around whether a judge or an arbitrator would decide whether the parties agreed to arbitrate the consumer-fraud and other claims raised in plaintiffs’ complaint.

Click to read the relevant provision of the arbitration agreement

The trial court denied defendants’ motion to compel arbitration. The arbitration provision did not inform plaintiffs that they were waiving statutory remedies, and the provision conflicted with the remedies available under the New Jersey Consumer Fraud Act, N.J.S.A. 56:8-1 to -195, the trial court ruled.  The Appellate Division reversed, holding that the “the parties ‘clearly and unmistakably’ agreed an arbitrator would determine issues of arbitrability” and that plaintiffs failed to “specifically attack[] the delegation clause.”  The Appellate Division therefore determined that “arbitrability [was] for the arbitrator to decide.”

The New Jersey Supreme court sided with the trial court, and reversed. Applying state law principles of contract law, the Court opined that the arbitration provision lacks a clearly identifiable delegation clause explaining that an arbitrator would decide whether the parties agreed to arbitrate legal claims, including statutory violations, and did not not inform the plaintiffs that arbitration is a substitute for bringing their claims before a court or jury.

The NJ Supreme Court pointed to the well-settled principle in First Options of Chicago, Inc. v. Kaplan, 514 U.S. 938 (1995), that issues of arbitrability should apply “ordinary state-law principles that govern the formation of contracts,” to utilize the standard enumerated by the Court in Atalese v. U.S. Legal Services Group, 219 N.J. 430 (2014), cert. denied, 135 S. Ct. 2804 (2015). In Atalese, the New Jersey Supreme Court held that, as with any contractual provision in New Jersey waiving a constitutional or statutory right, a waiver of rights provision in an arbitration agreement “must be clearly and unmistakably established.” Accordingly, because the arbitration provision at issue in Dever did not “clearly and unmistakably delegate arbitrability to the arbitrator,” it was unenforceable.

The New Jersey Supreme Court’s decision in Dever accentuates a growing tension between New Jersey state courts and federal courts concerning the proper interpretation and enforceability of arbitration agreements.  This tension is on full display in Justice Patterson’s 24-page dissent in Dever, where she sides with the Appellate Division’s decision to allow the arbitrator to rule on arbitrability.