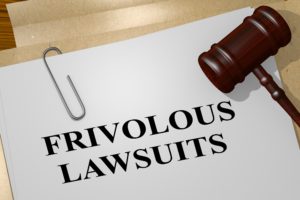 What do you do when confronted with a disgruntled and out-of-control litigant who continually files frivolous lawsuits against the same client involving the same dispute previously resolved by a final judgment in the Superior Court of New Jersey?

The short answer is you seek an injunction, as our firm successfully obtained this past week in the case of a vexatious litigant who filed a frivolous lawsuit against our client as the means to attack an adverse decision issued in a commercial foreclosure action. Luis A. Suazo v. Claude Diletto, et al., Superior Court of New Jersey, Law Division, Essex County, Docket No. ESX-L-2832-18.

In Rosenblum, the Appellate Division held that “an Assignment Judge can prevent the filing of a complaint, or issuance of a summons thereon, when the plaintiff’s prior litigation demonstrates a pattern of frivolous pleadings.” 333 N.J. Super. at 387.

In our client’s particular case, the disgruntled property owner previously was labeled as a serial bankruptcy filer by virtue of having filed 9 prior bankruptcy cases in the United States Bankruptcy Court for the District of New Jersey to invoke the automatic stay and delay our client’s foreclosure case, including a fraudulent bankruptcy petition filed under his father’s name.

In addition, the disgruntled property owner unsuccessfully filed an ex-parte petition in the United States District Court for the District of New Jersey seeking to enjoin a sheriff’s sale scheduled in the foreclosure case. Thereafter, on the same day as the sheriff’s sale the disgruntled litigant filed suit in the Essex County Law Division raising the exact same claims that several jurists previously had rejected in the foreclosure action and related litigation.

Over the disgruntled litigant’s objection, based on the Rosenblum decision we persuaded the Essex County Civil Presiding Judge to issue an injunction prohibiting this out-of-control litigant from filing of any further lawsuits against our clients without first receiving the express written approval from the sitting Essex County Assignment Judge.  Download a copy of the Injunction Order.