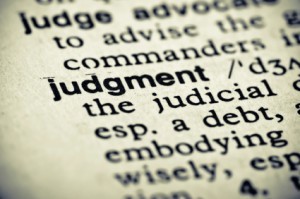 Frequently we receive inquiries from prospective homeowners about clearing judgments discharged in their prior bankruptcy. The question typically arises after a contract of sale has been finalized and attorney review completed. A title company search reveals a prior judgment entered in the Superior Court of New Jersey, but which the client previously discharged in bankruptcy.

The title company is insisting that the judgment would constitute a lien on the newly acquired property and therefore list the judgment as an exception to delivering clear title.  “But how could this be,” asks the client?  “We previously discharged the same judgment in our bankruptcy case several years ago,” the client points out. Is the title company correct?

In this factual scenario the answer is “no“.

Where the judgment was a lien on real property owned by the bankrupt prior to the time he was adjudged a bankrupt, and not subject to be discharged or released under the provisions of the Bankruptcy Act, the lien thereof upon said real estate shall not be affected by said order and may be enforced, but in all other respects the judgment shall be of no force or validity.

The law firm of LoFaro & Reiser represents individuals requiring assistance in discharging prior judgments docketed with the Superior Court of New Jersey pursuant to N.J.S.A. 2A:16-49.1.  In many instances we have successfully persuaded title companies to remove a judgment as an exception to the title policy by writing a letter citing the relevant provisions of N.J.S.A. 2A:16-49.1 and providing a copy of the bankruptcy schedule identifying the judgment debt and bankruptcy discharge.