In a precedent setting case that has significant implications for the use of fine print in advertising, Group SEB USA, Inc. v. Euro-Pro Operating, LLC, Case No. 14-2767 (3d Cir. December 17, 2014), the U.S. Third Circuit Court of Appeals held that small print statements explicitly defining the terms of a more prominent superior performance claim (e.g. “Shark irons have the ‘#1 most powerful steam’”) can render that performance claim unambiguous – and thus subject to a literal falsity claim under section 43(a) of the Lanham Act, 15 U.S.C. 1125(a)– even if consumers are unlikely to read the small print and even if survey evidence exists indicating that consumers consider the overall performance claim ambiguous. 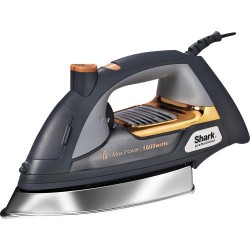 The plaintiff in this comparative false advertising case distributes and sells various household consumer products under several brand names throughout the U.S., including electric steam irons sold under the Rowenta brand name.  Likewise, the defendant Euro-Pro manufactures, markets and distributes kitchen and household appliances, including steam irons that it sells under the brand name Shark.

“MORE POWERFUL vs. ROWENTA ® at half the price.”

Each of these phrases displayed on the packing for the Shark 404 referenced a separate fine print footnote.  The footnote for the first phrase stated that the claim is “based on independent comparative steam burst testing to ROWENTA DW5080 (grams/shot).” The fine print footnote for the second phrase states that the Shark 405 “offers more grams per minute (maximum steam setting while bursting before water spots appear) when compared to leading competition in the same price range, at time of printing.”  The packaging for the defendant’s Shark 505 model made substantially the same claims.

Also, both the Shark 405 and Shark 505 models included hang tag displays claiming that the Shark steam irons deliver “MORE POWERFUL STEAM vs. Rowenta  . . . at half the price.”  The hang tags also included a reference stating that the claim is “[b]ased on independent comparative steam burst testing” to the respective Rowenta steam irons in “(grams/shot).”

After plaintiff obtained test results demonstrating that its irons were more powerful than Euro-Pro’s Shark 405 and Shark 505 models in both grams per minute and grams per shot  – thus disproving Euro-Pro’s advertising claims – plaintiff filed suit in the United States District Court for the Western District of Pennsylvania, asserting claims for false advertising and unfair competition.  The plaintiff also sought a preliminary injunction enjoining Euro-Pro from continuing to promote the false advertisement claims.  After conducting an evidentiary hearing, including testimony from plaintiff’s marketing director who claimed that direct reference to his company’s Rowent brand on the lower priced Shark steam irons would erode Rowenta’s brand reputation with retailers and consumers, the District Court granted plaintiff’s injunction and ordered Euro-Pro to place stickers over the claims appearing on its product packaging and remove the hang tags from these steam iron models.

Referring to precedent established by the United States Supreme Court, the Third Circuit noted that a preliminary injunction is an “extraordinary remedy” that can only be granted upon a “clear showing that the plaintiff is entitled to the relief.”  “A plaintiff seeking a preliminary injunction must establish that he is likely to succeed on the merits [of the claim], that he is likely to suffer irreparable harm in the absence of preliminary relief, that the balance of equities tips in his favor, and the injunction is in the public interest.”

The Third Circuit affirmed the District Court’s injunction, determining that plaintiff made a sufficient showing of irreparable harm to justify an injunction.

“When a product’s packaging includes an advertising claim and unambiguously defines a claim term, the packaging’s definition of the claim applies to the claim’s explicit message,”

This decision delivers an important message to advertisers and lawyers who specialize in advertising law: language clarifying the meaning of an otherwise ambiguous term must be carefully considered and treated as if it were part of the overall advertising claim, no matter how small the font used in a footnote.