When Must a Judge be Disqualified in New Jersey Litigation? 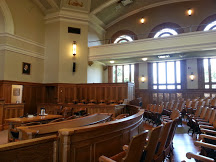 The factors requiring disqualification of judges, on the court’s own motion, are set forth in New Jersey Court Rule 1:12-1 which states as follows:

The judge of any court shall be disqualified on the court’s own motion and shall not sit in any matter, if the judge

Several of these disqualification factors are also recited in a separate statute.  N.J.S.A. 2A:15-49.  A judge must disqualify himself if his impartiality might reasonably be questioned. Code of Judicial Conduct, Canon 3C(1)(a).

If a litigant believes that a judge presiding over his or her case should be disqualified and the judge has not sought to do so on the Court’s own motion, then pursuant to New Jersey Court Rule 1:12-2 the litigant can independently file a disqualification motion.

Public Confidence and Integrity of the Court

There is nothing more sacrosanct than maintaining the public trust in our judiciary.  Hence, as the New Jersey Supreme Court Advisory Committee recently explained:

The purpose of our judicial disqualification provisions “is to maintain public confidence in the integrity of the judicial process, which in turn depends on a belief in the impersonality of judicial decision making.” Even a “righteous judgment” will not find acceptance in the public’s mind unless the judge’s impartiality and fairness are above suspicion. “In other words, judges must avoid acting in . . . a manner that may be perceived as partial,” otherwise the integrity of the judicial process will be cast in doubt[.]

However, there are counterbalancing factors that weigh against judicial disqualification.  For instance, the United States Supreme Court has recognized that a court’s duty to preside is as strong as the duty to disqualify.  See Laird v. Tatum, 409 U.S. 824, 837, 93 S.Ct. 7, 15, 34 L. Ed. 2d 50, 60 (1972) (stating that a judge “has a duty to sit where not disqualified which is equally as strong as the duty to not sit where disqualified” (emphasis omitted)).  Likewise, New Jersey courts have cautioned that judicial disqualification should be exercised with caution.  See Marshall, supra, 148 N.J. at 276 (stating judges are not free to “err on the side of caution” by granting recusal motions); Hundred East Credit Corp. v. Eric Schuster Corp., 212 N.J. Super. 350, 358 (App. Div.) (“It is not only unnecessary for a judge to withdraw from a case upon a mere suggestion that he is disqualified: it is improper for him to do so unless the alleged cause of recusal is known by him to exist or is shown to be true in fact.”), certif. denied, 107 N.J. 60 (1986).

Does a judge’s involvement in settlement discussions serve as a basis for disqualification?

A trial judge may engage in efforts to settle a case without requiring him or her to step aside.  See Panitch v. Panitch 339 N.J. Super. 63, 71 (App.Div. 2001) (recognizing “the usual non jury case where a judge must necessarily be involved to some degree, although not completely immersed, in attempting to move a case or encourage settlement of a case”).